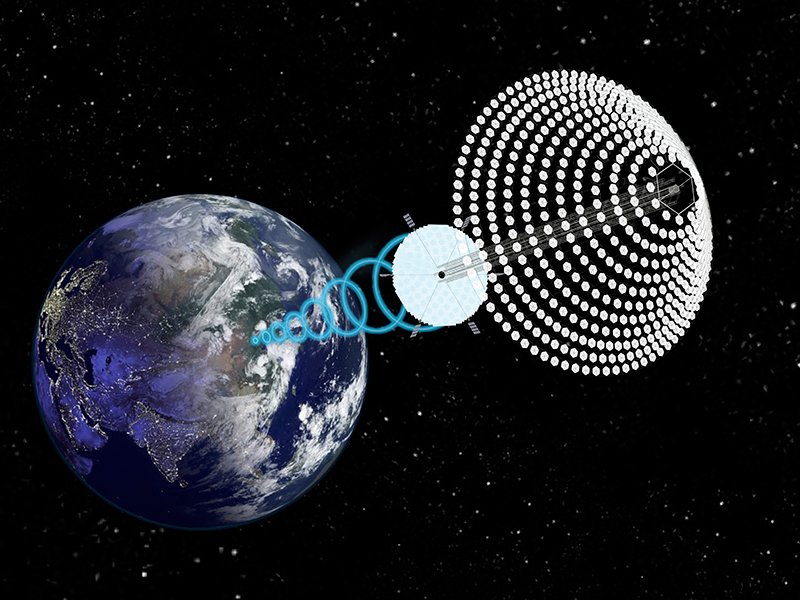 Think about what you know about clean sources of energy. What’s the greenest?

Hydroelectric, geothermal, wind and solar all probably spring to mind. Environmentally friendly though they may be, they all have significant limits on how much energy they can produce and where they can be used. To wit, despite some really cool advances in solar, solar panels still can only generate energy while the sun shines.

The solution, then, is obvious. Go where the sun never sets: in space.

That’s the vision of scientists, researchers and entrepreneurs both here in the United States as well as in Japan, China and Europe. Though the concept has been batted around at least since the 1970s, it’s been repeatedly revisited and abandoned because getting all the parts up there, and the people to put it all together, was impossibly expensive. Only with the advent of super small, mass-produced satellites and reusable booster rockets are some beginning to take a much harder look at making space solar a reality.

There are dozens upon dozens of ideas for how to build a space-based solar collection system, but the basic gist goes something like this: launch and robotically assemble several hundred or thousand identically sized modules in geosynchronous orbit. One part comprises mirrors to reflect and concentrate sunlight onto solar panels that convert the energy into electricity. Converters turn that electricity into low-intensity microwaves that are beamed to large, circular receivers on the ground. Those antennae re-convert the microwaves back into electricity, which can be fed into the existing grid.

John Mankins, who spent 25 years at NASA and Caltech’s Jet Propulsion Laboratory, received funding from NASA’s Institute of Advanced Concepts in 2011 to refine his space solar power plant concept in greater detail. The technology and engineering required to make space solar a reality already exists, he insists, but as with any expensive new idea, it comes down to greenbacks and gumption.

“It’s not like fusion—there’s no new physics involved,” Mankins says, referencing ITER, the 35-nation collaboration to build a fusion reactor in France. “There’s no secret sauce. It’s a financial hurdle to get funding to develop the elements and demonstrate the new architecture required to do this.”

Mankins and others estimate the total cost for developing, building, launching and assembling all the components of a space-based solar power plant is on the order of $4 to $5 billion—a fraction of the $28 billion price tag on China’s Three Gorges Dam. Mankins estimates a working scale model with full-sized components could be had for $100 million. By comparison, the Tennessee Valley Authority’s recently completed Watts Bar nuclear plant took 43 years to build, from start to stuttering finish, and cost $4.7 billion all told.

Critically, what consumers would pay—the price per kilowatt-hour—needs to be in the same ballpark as conventional sources of energy produced with coal, natural gas and nuclear, which range in price from 3 to 12 cents per kilowatt-hour. Hydroelectric can be staggeringly cheap, at less than one cent per kilowatt-hour—but only if you’re lucky enough to live in a region with abundant high-flow rivers, like in parts of Canada and Wisconsin. Geothermal is very economical too, checking in at 3 cents per kilowatt-hour, but you’ll need to ask the Icelanders how they like their power bills. And wind advocates trumpeted the news last year that costs for that renewable resource had plummeted to 2.5 cents per kilowatt-hour.

Getting the cost into the low double digits or even single digits of cents per kilowatt-hour is absolutely essential to make space solar a competitive utility, says Gary Spirnak, CEO of the California-based energy company Solaren.

Spirnak’s company is approved as a solar energy provider in California, and has had past supply arrangements with Pacific Gas and Electric, but its business model is completely based on generating their power from space-harvested solar. Solaren is in the process of negotiating new agreements with one or more utilities. The company has patents here in the U.S. for its design as well as in Europe, Russia, China, Japan and Canada, and has secured a first round of financing for a lab-based demonstration of its component technologies sometime in the next year. Spirnak hopes to convince investors to support a 250-megawatt pilot plant by the end of the development and testing phase, perhaps within five years.

Two keystone structures are required for space solar to work. First, solid-state power amplifiers that efficiently convert electricity from collected sunlight into radio-frequency waves, and receivers on the ground that re-convert the RF waves back into electricity.

Paul Jaffe, an engineer at the Naval Research Laboratory in Washington, D.C., worked on two prototypes of the collection module, which he refers to as a “sandwich” since the solar collector, power converter and RF emitter are all smashed together into a foot-square tile two inches thick. The weight of each individual module ultimately determines the pricing of the distributed electricity on the ground; in terms of watts per launched kilogram, Jaffe says the basic tile design came in at around 6 watts per kilogram.

Taking into account that power output, a 20-year solar power plant lifetime, a launch cost of $2,500 per kilo, and different cost levels of the components themselves, Jaffe calculates that if the mass decreased and wattage increased to 500 watts per kilo, that equates to a cost of 3 cents per kilowatt-hour.

“Doing even really simple things to reduce the mass gets us into the 100 watts per kilogram range, and 1,000 watts per kilogram isn’t crazy,” he says. “You get very good efficiencies with current solar technology that’s already commercially available, and we carry around these very efficient, lightweight RF converters in our pockets every day.”

RF converters are the very reason cell phones work—phones are basically glorified walkie-talkies whose signals are helped along by a network of signal relay stations. The converters in the phone translate radio waves into data that we understand—audio—and vice versa. This technology is central to research into space solar at Caltech, in a collaboration between scientists and engineers there and Northrop Grumman.

Spirnak says the main thrust of Solaren’s work in recent months has been just that—reducing the weight of their modules. Though reusable rockets would knock the overall production cost down even further, Spirnak isn’t holding his breath in the near term; he’s figuring on using conventional heavy lift vehicles to get Solaren’s components into space.

“We spent a lot of time ruthlessly taking weight out of the system,” Spirnak says. “We can package individual large elements into single launchers, with some interesting feats of origami,” though delivering the entire system into space will still require multiple super-heavy launchers.

Jaffe says the single most common question he gets when talking about space solar isn’t whether it can or should be done, but how dangerous that energy beam from space is. Won’t it flash-fry birds and planes in the sky when they pass through the beam?

“If you sit outside on a sunny afternoon for 15 minutes, you don’t get burned,” he explains. “Our radios, TVs and cell phones aren’t cooking us, and those are all at the same frequencies as what’s being proposed. There are already safety limits [on microwave transmissions] set by IEEE [Institute of Electrical and Electronics Engineers], so you design a system to make sure the power is spread over a large area. It won’t accidentally turn into a death ray.”

To get the best cost-to-weight ratios, efficiencies of scale, and have comparable electrical generation capacity of an average nuclear power plant (1 to 2 gigawatts), any solar collection array in space would need to be roughly a kilometer in diameter.

Collection receivers on the ground would need to be accordingly large—for a space-based solar plant to generate around one gigawatt of energy, a one-kilometer (.62 mile) solar collector would beam energy to a 3.5-wide kilometer (2 mile) receiver on the ground. That would require an area of around 900 acres. Compare that with the Solar Star solar panel plant in California, currently the United States’ largest solar utility, which occupies 3,200 acres.

Radio-frequency power transmission does have one significant drawback: the “safe” wavelengths that also won’t get refracted by something as simple as rain are already overcrowded, clogged up through regular radio transmissions, as well as military, industrial and satellite use.

Critics of space solar, prominent among them Tesla’s Elon Musk, say economy-scale efficiencies just can’t be achieved because of all the converting and reconverting of the power that is required.

But Jaffe is hopeful that the old crack on fusion won’t also become true of space solar: “It’s been 10 years away for the last 60 years,” he laughs.

Mankins stresses that with the global population forecast to explode to 11.3 billion by the end of the century, with almost all of that represented in the developing world, space solar deserves serious investment by public entities as well as private partners. He says abundant clean energy is necessary to fulfill basic human needs, as well as address the assured environmental destruction if all of that energy comes from conventional sources.

“If the mix of energy sources does not change radically, there is no way we’ll get to carbon neutral,” Mankins says. “You also can’t tell 800 million people in China that they must stay in abject poverty. There’s a need not just to offset today’s carbon use, but to look forward 70 years and to how we’ll offset three times today’s use. We really need big solutions.”