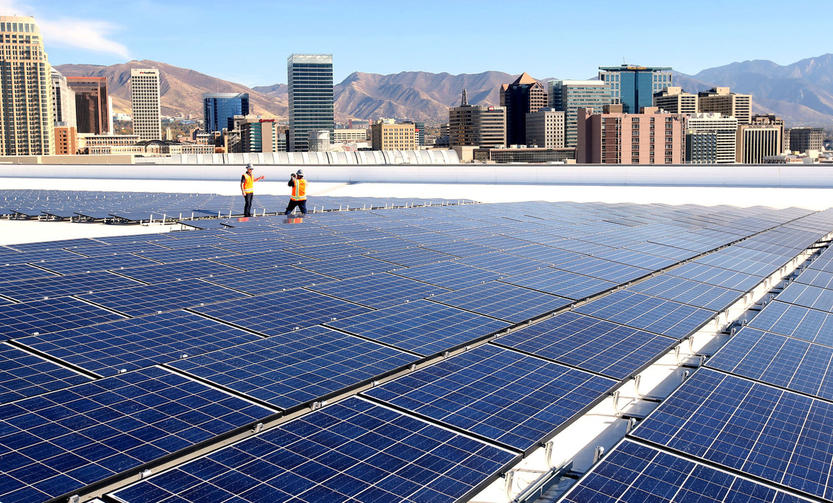 Utah’s breakneck pace of solar energy adoption over the past decade needs to continue on an accelerated course, advocates say, unveiling a plan Thursday that recommends the removal of existing roadblocks.

The Wasatch Solar Team, led by the advocacy organization Utah Clean Energy and Salt Lake City, developed “A Bright Future: A 10 Year Solar Deployment Plan for Utah,” and introduced it at a media event at the state Capitol.

Advocates, industry and others collaborated to produce the plan, which outlines four key areas of continuing challenges and identifies ways to reduce their impact.

“This is the future we really want to provide to all Utahns,” said Vicki Bennett, director of sustainability for Salt Lake City.

In 2006, there were only 76 rooftop solar installations in the state, according to the Wasatch Solar Team. By 2016, several thousand households were producing an estimated 140 megawatts of solar energy.

For that growth to continue, the plan recommends expanding access to solar energy by removing unnecessary restrictions on rooftop solar, reducing the shortage of available financing options, tackling the lack of suitable roof space and opening up avenues to people on fixed incomes.

The state would also be well-served if it implemented a mechanism to streamline the permitting process, with the report noting that depending on where one lives, “obtaining that permit can be a walk in the park or a tangle of red tape.”

The existence of unpredictable and inconsistent rules often lead to added costs and prolonged wait time for customers, the report adds, pointing out that in some extreme cases, installers have been deterred from working in certain communities.

Wright added that the state needs to work to reduce costs associated with the interconnection process, which was upgraded with new standards in 2010.

Since that time, national guidelines for the interconnection of rooftop solar have been modified to reflect the growing interest in renewable energy, the report notes.

One of the most complicated and likely the most controversial challenges the report outlines lies at the heart of a recommendation to overhaul the utility business model to align it with the 21st century embrace of renewable energy and energy efficiency.

While renewable energy and improved energy efficiency may save public utilities and customers the expense of costly capital investments — such as a new power plant — the power provider loses out of profits realized from new electricity sales.

Ben Hart, managing director of the Governor’s Office of Economic Development, said tapping into Utah’s energy resources and ensuring associated industries grow and thrive is a cornerstone of his office’s focus.

With Utah’s remarkable growth in solar, Hart said the state needs to do what it can to assure continued success.

In 2015, for example, Utah was fifth in the nation for new solar installations and was 11th for cumulative solar capacity per capita.

Previous Post: « Floating solar panel market to be worth $2.7B in 2025
Next Post: Board of Ed accepts bid for more solar panels »