Researchers have found a way to pluck carbon dioxide from the atmosphere and turn it into a useful product – carbon nanofibers. They say, using their method across an area 10% the size of the Sahara Desert, enough CO2 could be removed to decrease atmospheric levels below pre-Industrial Revolution levels within 10 years. The research was presented at a meeting of the American Chemical Society (ACS) in Boston this week, and published online in Nano Letters.

The process involves using two electrodes in a bath of molten lithium carbonates at high temperature, 750°C (1,380°F). The CO2 dissolves when subjected to both the heat and a direct current through the electrodes, made from nickel and steel. High-yield (80 to 100%) carbon nanofibers will then build up on the steel electrode and can be removed. What’s more, there are no waste products; aside from carbon, the only other product of the reaction is oxygen.

“We can directly convert CO2 through our process to a useful commodity: carbon nanofibers,” lead researcher Dr. Stuart Licht of George Washington University in Washington D.C. told IFLScience. Carbon nanofibers could be used for all sorts of things, including building construction and batteries with a greater storage capacity. Making them has proved costly, though; this research could provide a cheaper alternative, which has the rather pleasing side effect of removing CO2 from the air.

The system can be powered using an extremely efficient solar-energy system. It focuses the Sun’s rays on a solar cell, and uses the same sunlight to generate heat. For this reason, somewhere hot and sunny like the Sahara Desert or Mojave Desert would be perfect for a large-scale version of the process. 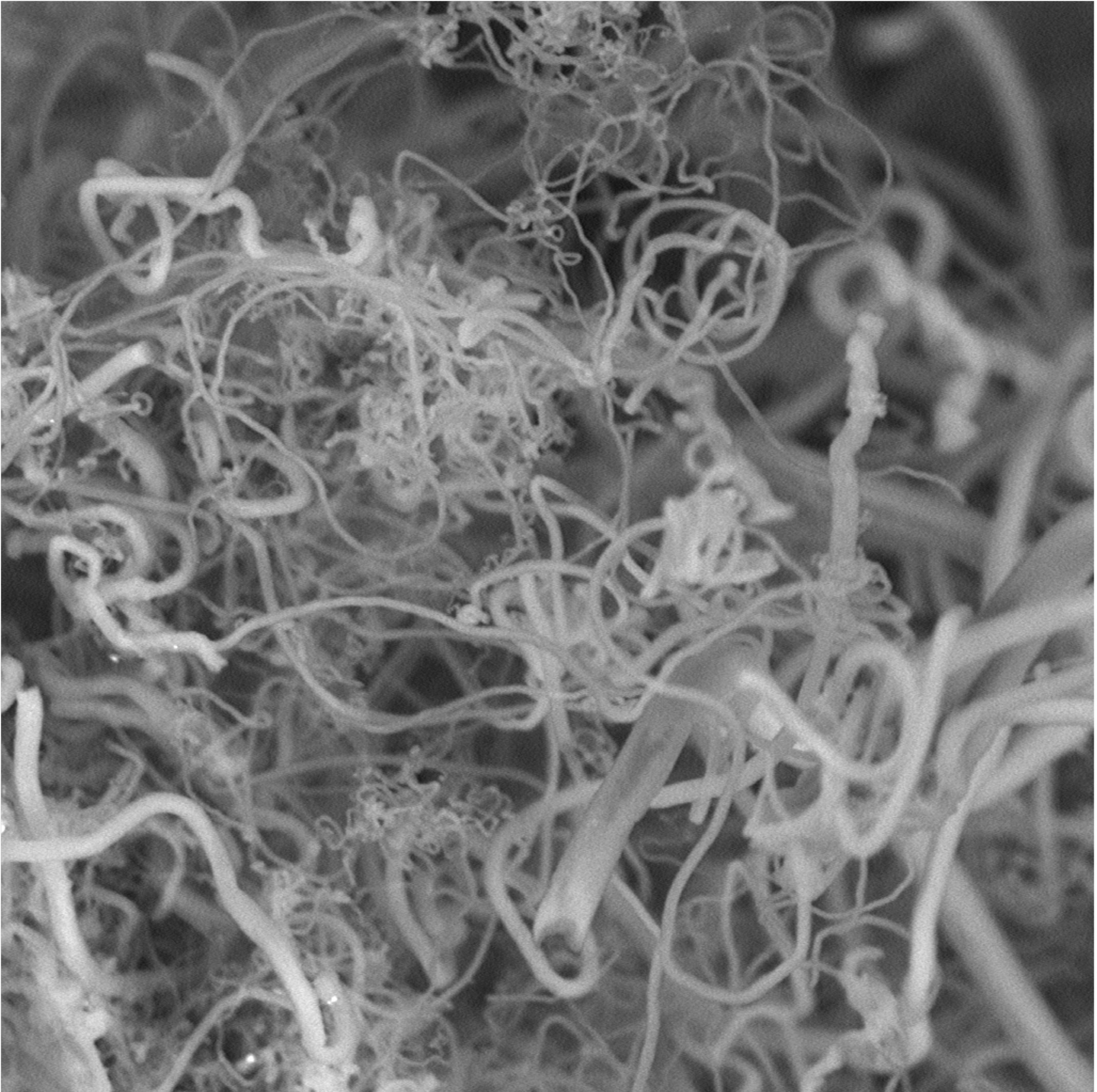 Shown are carbon nanofibers, made by removing CO2 from the air. Stuart Licht, Ph.D.

Turning the CO2 into useful carbon nanofibers, and not just removing it from the atmosphere, is especially important. According to Licht, carbon nanofibers sell for about $25,000 (£16,000) a ton – compared to $40 (£25) a ton for coal and $100 (£65) for graphite. This is of course partially because there is not a huge demand for carbon nanofibers yet – but if their potential can be realized, this research could be huge.

“The exciting ramification is that the carbon nanofibers are quite valuable, and this should provide significant impetus to start scaling up and building these plants,” said Licht. This prototype system is estimated to produce a ton of carbon nanofiber at $1,000 (£640) – giving returns of 25:1 in the current market. If someone were to scale it up, it would not only be beneficial to the environment – but would be financially viable as well.

“Climate change is a massive problem,” said Licht. “Greenhouse gases pose a very serious global crisis.” So, is this a solution to global warming? “The system scales beautifully,” said Licht. “I think this is a viable path, although I think we would like to see it in much larger demonstration modes first.”

If the system were to be scaled up, Licht thinks that it could have a drastic effect on atmospheric CO2. “We calculate that with a physical area less than 10 percent the size of the Sahara Desert, our process could remove enough CO2 to decrease atmospheric levels to those of the pre-industrial revolution within 10 years,” he said in a statement.

It should be noted that the system, in its present form, is experimental. Whether it truly could be scaled up to industrial levels has yet to be seen. And it’s probably best to caution against seemingly simply solutions to global warming; drastic reductions in our CO2 emissions are still needed, and we shouldn’t rely on schemes like this just yet to solve the crisis. But there’s no denying that the research is promising.