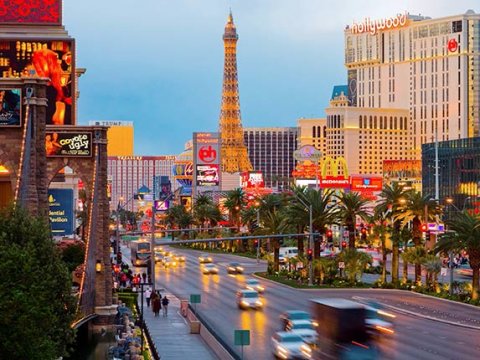 Las Vegas may not be the first city you think of when you think of sustainability, but maybe it should be. When SunPower recently turned on the Boulder 1 solar project, the City of Las Vegas’ government became the first in the country to be entirely powered by renewable energy.

This follows Las Vegas’ leadership in water conservation, cutting consumption by 23% between 2005 and 2015. As cities across the country look for ways to cut costs and use resources more sustainably, maybe Las Vegas should be where they look to find a success story.

The abundance of renewable energy in Nevada

The same sun that makes the desert in Southern Nevada so punishingly hot is also a resource that makes renewable energy cheap. Solar energy in the state is among the cheapest in the country, and at 4.6 cents per kWh for energy from the Boulder 1 project it’s competitive with fossil fuel. When the city threatened to leave Berkshire Hathaway subsidiary NV Energy, the utility agreed to buy more solar for the city’s buildings to use, which now accounts for 100% of total energy consumed by the city.

But building renewable energy plants is only part of the story. The city has reduced electricity consumption by 30% through a combination of efficiency programs and on-site solar. Between efficiency and renewables, the City of Las Vegas says it’s going to save $5 million annually, no small amount for a mid-size U.S. city.

It’s worth noting that energy isn’t the only place Las Vegas has improved its sustainability. The city has put a lot of effort into reducing water consumption, treating much of the water that’s dumped down the drain and returning it to Lake Mead. But water conservation is more of a necessity than anything in the middle of the desert.

Las Vegas and the war with NV Energy

The City of Las Vegas threatening to leave NV Energy for cleaner sources of energy isn’t entirely unique in Nevada. MGM Resorts and Wynn Resorts paid a combined $103 million earlier this year to leave NV Energy and begin buying their electricity elsewhere. MGM Resorts has a massive solar array at Mandalay Bay and will consider buying energy from solar developers in the future. Wynn has been quiet about its plans.

On top of the city and casino defections, voters passed a constitutional amendment that stripped NV Energy of its monopoly. The ballot initiative read like this:

Shall Article 1 of the Nevada Constitution be amended to require the Legislature to provide by law for the establishment of an open, competitive retail electric energy market that prohibits the granting of monopolies and exclusive franchises for the generation of electricity?

Voters passed the amendment with nearly three quarters of the vote. It’ll take time to break up the energy monopoly, but energy choice is taking a big step forward in Nevada.

Maybe it’s the desert location that makes Nevada so conscious about the sustainability of its city, and maybe it’s the abundant resources that have made a move to renewables so attractive. Whatever it is, Las Vegas has become an example for other cities around the country. And sustainability isn’t just good for the environment, it’s good for the bottom line as well.