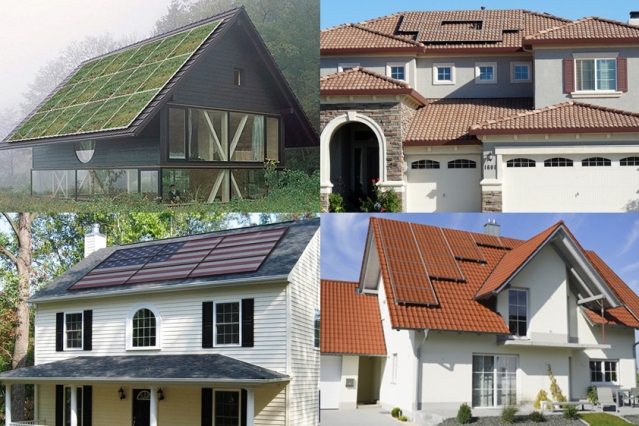 Residential solar power is on a sharp rise in the United States as photovoltaic systems become cheaper and more powerful for homeowners. A 2012 study by the U.S. Department of Energy (DOE) predicts that solar could reach 1 million to 3.8 million homes by 2020, a big leap from just 30,000 homes in 2006.

But that adoption rate could still use a boost, according to MIT spinout Sistine Solar. “If you look at the landscape today, less than 1 percent of U.S. households have gone solar, so it’s nowhere near mass adoption,” says co-founder Senthil Balasubramanian MBA ’13.

Sistine’s novel technology, SolarSkin, is a layer that can be imprinted with any image and embedded into a solar panel without interfering with the panel’s efficacy. Homeowners can match their rooftop or a grassy lawn. Panels can also be fitted with business logos, advertisements, or even a country’s flag. SolarSkin systems cost about 10 percent more than traditional panel installations. But over the life of the system, a homeowner can still expect to save more than $30,000, according to the startup.

A winner of a 2013 MIT Clean Energy Prize, Sistine has recently garnered significant media attention as a rising “aesthetic solar” startup. Last summer, one of its pilot projects was featured on the Lifetime television series “Designing Spaces,” where the panels blended in with the shingle roof of a log cabin in Hubbardston, Massachusetts.

In December, the startup installed its first residential SolarSkin panels, in a 10-kilowatt system that matches a cedar pattern on a house in Norwell, Massachusetts. Now, the Cambridge-based startup says it has 200 homes seeking installations, primarily in Massachusetts and California, where solar is in high demand.

“We think SolarSkin is going to catch on like wildfire,” Balasubramanian says. “There is a tremendous desire by homeowners to cut utility bills, and solar is finding reception with them — and homeowners care a lot about aesthetics.”

SolarSkin is the product of the co-founders’ unique vision, combined with MIT talent that helped make the product a reality.

Balasubramanian came to MIT Sloan in 2011, after several years in the solar-power industry, with hopes of starting his own solar-power startup — a passion shared by classmate and Sistine co-founder Ido Salama MBA ’13.

One day, the two were brainstorming at the Muddy Charles Pub, when a surprisingly overlooked issue popped up: Homeowners, they heard, don’t really like the look of solar panels. That began a nebulous business mission to “captivate people’s imaginations and connect people on an emotional level with solar,” Balasubramanian says.

Recruiting Jonathan Mailoa, then a PhD student in MIT’s Photovoltaic Research Laboratory, and Samantha Holmes, a mosaic artist trained in Italy who is still with the startup, the four designed solar panels that could be embedded on massive sculptures and other 3-D objects. They took the idea to 15.366 (Energy Ventures), where “it was drilled into our heads that you have to do a lot of market testing before you build a product,” Balasubramanian says.

That was a good thing, too, he adds, because they realized their product wasn’t scalable. “We didn’t want to make a few installations that people talk about. … We [wanted to] make solar so prevalent that within our lifetime we can see the entire world convert to 100 percent clean energy,” Balasubramanian says.

The team’s focus then shifted to manufacturing solar panels that could match building facades or street fixtures such as bus shelters and information kiosks. In 2013, the idea earned the team — then officially Sistine Solar — a modest DOE grant and a $20,000 prize from the MIT Clean Energy Prize competition, “which was a game-changer for us,” Balasubramanian says.

But, while trying to construct custom-designed panels, another idea struck: Why not just make a layer to embed into existing solar panels? Recruiting MIT mechanical engineering student Jody Fu, Sistine created the first SolarSkin prototype in 2015, leading to pilot projects for Microsoft, Starwood Hotels, and other companies in the region.

That summer, after earning another DOE grant for $1 million, Sistine recruited Anthony Occidentale, an MIT mechanical engineering student who has since helped further advance SolarSkin. “We benefited from the incredible talent at MIT,” Balasubramanian says. “Anthony is a shining example of someone who resonates with our vision and has all the tools to make this a reality.”

Imagination is the limit

SolarSkin is a layer that employs selective light filtration to display an image while still transmitting light to the underlying solar cells. The ad wraps displayed on bus windows offer a good analogy: The wraps reflect some light to display an image, while allowing the remaining light through so passengers inside the bus can see out. SolarSkin achieves a similar effect — “but the innovation lies in using a minute amount of light to reflect an image [and preserve] a high-efficiency solar module,” Balasubramanian says.

To achieve this, Occidentale and others at Sistine have developed undisclosed innovations in color science and human visual perception. “We’ve come up with a process where we color-correct the minimal information we have of the image on the panels to make that image appear, to the human eye, to be similar to the surrounding backdrop of roof shingles,” Occidentale says.

As for designs, Sistine has amassed a database of common rooftop patterns in the United States, such as asphalt shingles, clay tiles, and slate, in a wide variety of colors. “So if a homeowner says, for instance, ‘We have manufactured shingles in a barkwood pattern,’ we have a matching design for that,” he says. Custom designs aren’t as popular, but test projects include commercial prints for major companies, and even Occidentale’s face on a panel.

Currently, Sistine is testing SolarSkin for efficiency, durability, and longevity at the U.S. National Renewable Energy Laboratory under a DOE grant.

The field of aesthetic solar is still nascent, but it’s growing, with major companies such as Tesla designing entire solar-panel roofs. But, as far as Balasubramanian knows, Sistine is the only company that’s made a layer that can be integrated into any solar panel, and that can display any color as well as intricate patterns and actual images.

Companies could thus use SolarSkin solar panels to double as business signs. Municipalities could install light-powering solar panels on highways that blend in with the surrounding nature. Panels with changeable advertisements could be placed on bus shelters to charge cell phones, information kiosks, and other devices. “You can start putting solar in places you typically didn’t think of before,” Balasubramanian says. “Imagination is really the only limit with this technology.”