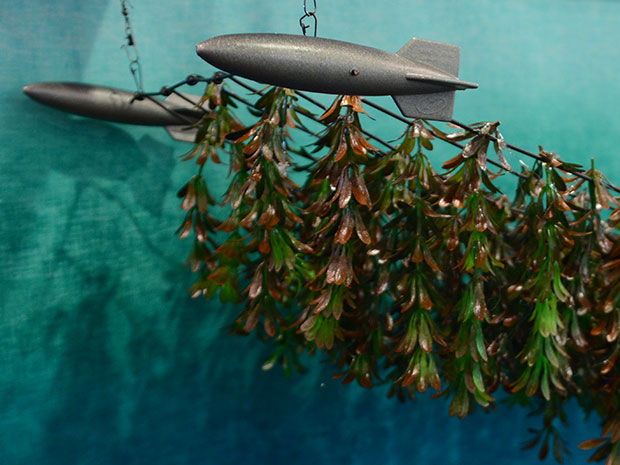 Renewable, carbon neutral energy is critical to a future where we’re not all living on rafts in the middle of a suddenly much larger ocean. Happily, we’ve got lots of ways of generating renewable energy, like solar farms, wind farms, and hydropower. Despite this diversity, renewables are horrendously inefficient compared with the dense solid or liquid combustibles that come straight out of the ground, both in terms of the energy density that they represent, as well as the amount of physical space that it takes to harvest them.

This is an often overlooked problem with renewable energy: Scaling up solar, wind, and hydro to make a dent in overall energy consumption takes up a significant amount of land area. Plus at some point, it starts to become impractical: There’s a finite amount of land area that is appropriate for and can be devoted to large-scale renewables. Not to mention that usually, these installations aren’t things that people want next door. As the global population increases, and energy consumption increases even more, we’re simply going to run out of space.

At the ARPA-E Energy Innovation Summit, a company called Marine BioEnergy was showing a potential new way of producing an enormous amount of low-cost energy in a way that doesn’t compete for land area. Their idea is to use drone submarines to farm kelp out in the open ocean, and then process it into carbon-neutral liquid biofuel. Turns out there are a lot of reasons why this might be a very good idea.

Liquid biofuels are, in theory, a great idea: You take plants and turn them into something that can fill up your car, but you don’t have to feel guilty about it because the carbon that your car emits into the atmosphere was sucked out of the atmosphere by the plant first, making the carbon emissions neutral. The problem is that it takes water, fertilizer, human effort, and so forth to grow the biofuel crop in the first place, and the overall process is relatively inefficient. Plus, you’re taking up land area that could be used to grow food instead.

Marine BioEnergy’s concept for open ocean kelp farms solves many of these problems. Land area is not a concern because the kelp is grown out in the open ocean, where there’s plenty of uncontested room. You don’t have to water the kelp because kelp lives in salt water, which is convenient. Kelp grows mind-blowingly quickly, up to 30 centimeters per day, and no weeding, pesticides, fertilizers, or any other kind of resource-intensive micromanagement is required. It has a photosynthetic efficiency that’s up to four times higher than terrestrial plants, and you can harvest it non-destructively. Kelp is also relatively easy to process into liquid biofuel because of its low cellulose content.

Why aren’t people doing this already? The same reason that you don’t find kelp growing by itself in the open ocean: It requires both sunlight and nutrients to thrive, and most of the ocean doesn’t have both of those things. The place to find cooler, nutrient-rich water in the ocean is deeper down, between 100 and 300 meters beneath the surface, or where there are natural upwellings, typically along coasts.

Marine BioEnergy proposes to solve this by tethering their kelp farms to drone submarines that will submerge the entire farm every night, bringing all of the kelp down to the nutrient rich water that it needs and then floating it back up again as the sun rises.

The drones themselves would be made out of reinforced concrete, and use commonly available commercial subsystems. Each farm would consist of an array of buoys connected by air hoses to allow to drones to control the buoyancy of the whole farm at once. The farms would only need to move at a few centimeters per second (the drones themselves would be powered by solar and wave generators). The idea is that the farms would mostly just float along with circular gyres found throughout the ocean. Once the kelp growing off of the hoses gets sufficiently long, the drones would pull the farm to a refinery ship, which would shave off most of the kelp and convert it into fuel before sending the farm back out into the ocean to regrow itself.

As far as biofuel goes, Marine BioEnergy estimates this open-ocean kelp farming method would result in “a cost per unit energy comparable to coal and natural gas: under $2.50/GJ.” You’d also end up with about 16 percent by mass of methane gas, which is useful, along with a solid waste byproduct that is very rich in nutrients and makes a great fertilizer. And don’t forget, since we’re talking about liquid fuel, we’d be able to leverage the massive existing infrastructure that we already have for moving that kind of stuff around and distributing it.

Marine BioEnergy tells us that to generate the amount of biofuel we’d need to cover the liquid fuel consumption of the United States transportation industry (cars, trucks, etc.), they’d need kelp farms approximately equivalent in area to the state of Utah, ten times over. The entire energy needs of the United States is about 30 Utahs worth. This is rather a large area, but Marine BioEnergy emphasized that you can squeeze 700 Utahs into the Pacific ocean, and it’s not space that’s really being used right now, except by some marine life that would probably be grateful for a bit of extra habitat.

Over the next 2.5 years, Marine BioEnergy will be running tests and pilot studies to determine how kelp responds when depth cycled, and if all goes well, they’ll be heading out to the open ocean for additional testing shortly thereafter.