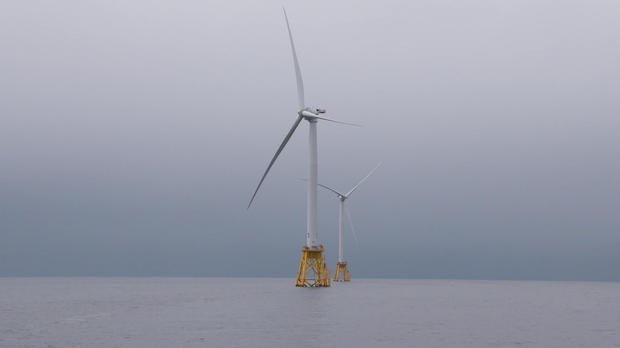 Fifteen miles off the coast of Rhode Island stand 600-foot turbines, anchored in 90 feet of Atlantic waters. They are expected to generate enough energy to power 17,000 homes.

“We see this being a big industry, we see offshore wind producing a lot of energy for the United States, particularly here in the Northeast where the winds are really strong,” said Jeff Grybowski, CEO of Deepwater Wind, which built the wind farm.

The turbines will most benefit Block Island. Because of its location, 45 minutes by boat from the mainland, it currently gets its oil and gas shipped in.

Residents pay a premium; At peak times, nearly 60 cents per kilowatt. The wind farm is expected to cut that cost to about 24 cents.

That is great news for 68-year old Steve Draper. His family runs the 1661 Inn, one of the oldest businesses on the island.

“Our bill last year was somewhere around $200,000,” he said. “You try everything to cut your costs. It’s a major factor in doing business here.”

While countries like Denmark have been using off-shore wind farms since the early 1990s, U.S.-based projects have been stalled due to court fights over environmental fears and protests over the turbines blocking beachfront views.

“It took us eight years to build this project but we are finally here,” Grybowski said.

Other projects are in the works, potentially bringing 200 more wind turbines to the area within the next 10 years. Draper expects people will get used to the new scenery.

“We all got used to telephone poles and telephone wires in our views and they’re not beautiful,” he said.