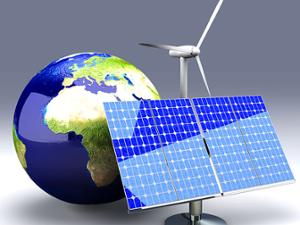 Africa has the lowest per capita electricity consumption in the world, due in part to scarce power generation and transmission infrastructure.

By some estimates, demand in the Eastern Africa Power Pool (EAPP) and Southern African Power Pool (SAPP), which include more than 50 percent of the continent’s population, may exceed 1,000 terra-watt hours (TWh) by 2030, nearly three times 2010 electricity consumption. Much work needs to be done to supply that expected demand.

Some of that supply will come from East Africa’s signature wind project, the $680-million, 310-megawatt Lake Turkana Wind Power site in Kenya. Last month, workers installed the last of 350 850-kilowatt Vestas turbines. Engineered by Siemens, the wind farm will add the equivalent of around 18 percent of Kenya’s total installed generating capacity and could serve up to 1 million households.

But there’s a catch. The Lake Turkana project is so remote that it needs a 438-kilometer-long transmission line to deliver its power to population centers. The powerline is years late and was only about 60 percent complete in January, according to the power journal ESI Africa. The project has suffered delays due to community opposition, legal issues, environmental problems, and the World Bank’s decision to withdraw support in 2012. The government recently had to take over payment and procurement from Madrid-based Isolux.

A new tool called Multicriteria Analysis for Planning Renewable Energy (MapRE) might keep such delays from happening by helping governments, utilities, and developers pick better sites for renewable energy projects. Developed by researchers at the University of California, Berkeley; Lawrence Berkeley National Laboratory; and International Renewable Energy Agency, MapRE lets users characterize solar and wind energy sites according to a fuller set of criteria than other analyses have.

MapRE starts with a large spatial database that includes wind speeds and timing, solar insolation, and other physical factors, explains Grace Wu, a PhD candidate who worked on it at the University of California, Berkeley’s Energy Resources Group. But it also factors in the impact of both the project and the transmission infrastructure it will need. These factors include the transmission extension costs based on population density and on the estimated distance to the nearest grid infrastructure. Using the tool, potential projects requiring long transmission extensions, which increase project risk, can be identified.

Combining these factors leads not to a list of sites that developers have typically gone after—the windiest places or the sunniest spots—but to what MapRE’s developers call “no-regrets sites.” These are spots that are low cost, low impact, and highly accessible.

The Lake Turkana Project “is a timely example of why this type of planning and analysis is important,” says Wu. “The riskiness of these remote projects highlight that the way we are currently prioritizing projects is leading to delays and additional costs. If we want wind and solar to be part of the mix as soon as possible we need to take a different approach to strategic siting.”

In a study recently published in the Proceedings of the National Academy of Sciences, the authors apply the MapRE tool and show that potential for renewable energy generation is several times greater than demand in many countries. In southern and eastern Africa, Wu and her co-authors argue that international energy trade can lower system costs by reducing the need for conventional power plants. For example, peak demand in one country might line up with peak solar or wind generation in another.

MapRE has already been introduced to stakeholders in both African power pools, and the researchers expect they will use it to prioritize projects. Zimbabwe is already using it to steer developers toward potential wind power sites, she says. The European Climate Fund is sponsoring a study using the MapRE tool to argue for wind and solar alternatives to a fossil-fuel plant in Bangladesh. And the World Bank and Vietnam are using MapRE to find a way to add 12 gigawatts of utility solar power in that country.

Wu and her collaborators hope to expand MapRe to more regions and make improve its usability.

Previous Post: « Redefining wave power – tapping into the global potential
Next Post: The Cows Of America Have A Renewable Energy Message For You »