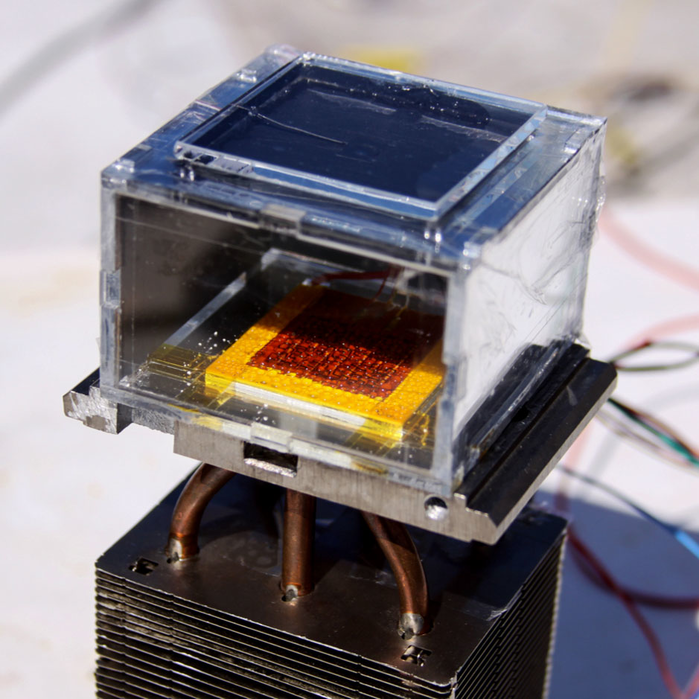 A new device, developed by researchers at UC Berkeley and MIT, promises to bring clean drinking water to remote areas by drawing it directly from the air. Though the device is currently only a prototype, its early results appear extremely promising.

The device, which calls to mind the “moisture vaporators” Luke Skywalker oversaw in his youth, was developed in collaboration between chemist Omar Yaghi and mechanical engineer Evelyn Wang. It relies on a special material combining zirconium and adipic acid into what’s known as a metal-organic framework. At night, the material collects water molecules from the air. Then, during the day, sunlight causes it to release the water into a condenser.

In early tests, the device has been able to produce nearly three liters of water over 12 hours for every kilogram of the zirconium-acid material, even in very dry regions. Speaking to Science, an expert not involved in the project called the results “a significant proof of concept.”

There is one obstacle to wide deployment of the devices—the high cost of the key zirconium material. But the researchers say they’ve already had some success using cheaper aluminum instead.

Yaghi says the device would allow for taking water supplies “off-grid.” That invites a comparison to the global spread of cell phones, which, by circumventing the need to lay expensive wires, have proven more accessible in developing nations than wired phones. Their spread has had profound effects on global agriculture, education, and governance.

But the impact of a device that produces drinkable clean water, without the need for expensive pipes, filtration facilities, or even power, could be even bigger. According to the World Health Organization, 1 in 10 people worldwide lack access to clean water, and 88% of all disease in the developing world has been estimated to be caused by unsafe drinking water. For lack of water, millions die each year of cholera, malaria, diarrhea, and malnutrition. Not surprisingly, a 2009 study found that GDP growth correlated strongly with access to clean water.

Issues of water access aren’t limited to developing nations, either. Even in the U.S., clean, safe water has been a hot button issue at the center of outrage over lead contamination in Flint, Michigan and other cities and concerns over California’s drought woes. Fears the Missouri River could be contaminated by a leak from the Dakota Access Pipeline inspired the protest slogan “water is life.“

A solution to the problem of water access, then, could unleash massive growth in regions where it’s still a problem, both at home and abroad.