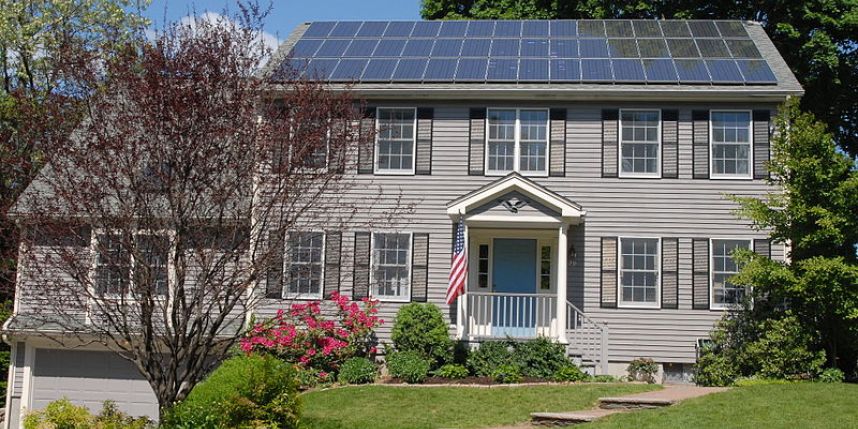 The future of solar energy in Massachusetts is looking bright.

The Commonwealth has the second highest amount of solar industry jobs in the country and is in the top 10 for solar energy-producing states, according to a new report.

The solar infrastructure here, from solar farms to panels on the roofs of homes, can generate 1,487 megawatts of energy — enough to power about 244,000 homes by the sun alone.

Over the next five years, according to SEIA, Massachusetts could add more than 2,000 more megawatts of solar energy to that existing infrastructure.

What is it about the Commonwealth that is spurring more solar?

Abigail Ross Hopper, president and CEO of SEIA, said it has to do with state policies — like the bill Gov. Charlie Baker signed last April that lifted the cap on solar energy net metering.

“Net metering is basically a system where, if you put solar on your home and generate electricity from those solar panels, whatever you don’t use, you put back on the grid, and you get reimbursed for that,” Hopper said. “That policy in Massachusetts has really allowed solar to develop.”

Hopper also said solar is not a “niche industry,” but something the average consumer can take part in. The more people buy solar technology, the cheaper it becomes. Although the more energy generated could also decrease the value of the energy.

If you aren’t able to add solar to your building — whether it’s commercial or residential real estate — there are other ways to get plugged in. Massachusetts has a total of 64.4 megawatts of “community solar” installed, more than 40 of which were added in 2016.

Community solar, Hopper said, works similar to community supported agriculture in that a person buys a share of a solar farm to get the benefits without having to devote land or a rooftop to the project.

Hopper said that this has become a big part of the Massachusetts solar market; Boston’s TD Garden connected to community solar recently.

Though some have expressed concern that clean energy initiatives could falter under the Trump Administration — and under Scott Pruitt, the new head of the Environmental Protection Agency, who has ties to the fossil fuel industry — Hopper is confident that the sun will continue to shine on solar, especially in Massachusetts.

“One of the great parts about U.S. energy policy is that it’s really divided between states and the federal level,” she said. “You have great leaders in the Commonwealth who have expressed an interest and desire to continue strong policies to grow solar in Massachusetts.”