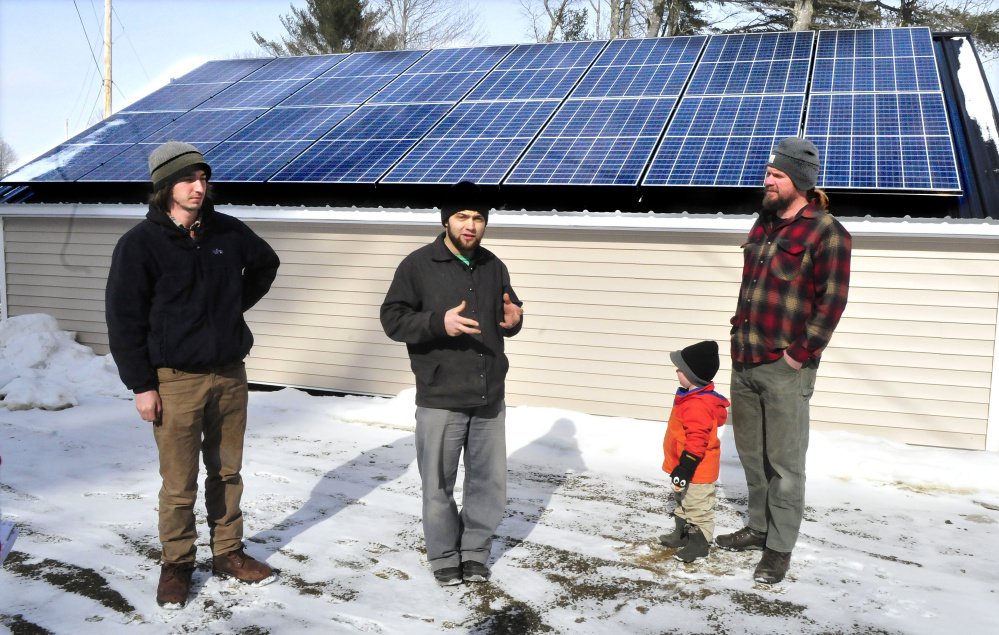 Matt Wagner decided one day to stop by an Amish-run business that builds mostly sheds and some tiny homes.

Wagner, who lives in Knox and is a project manager for Insource Renewables, went to Backyard Buildings in Unity to meet with a contractor, but he left with a realization.

“We had a lot of mutual interests in solar and deploying solar and doing it at a reasonable price,” Wagner said.

And so came the idea for solar sheds. They’re built just like any other shed, but feature a saltbox-style roof equipped with an array of solar panels.

So why get a solar shed instead of just adding solar panels to your roof?

“Obviously, there’s a huge benefit in the shed in that not all people’s roofs face south,” Wagner said. “To get a customer who has a perfect solar exposure and a perfectly-oriented roof isn’t extremely common.”

According to the Solar Energy Industries Association, the industry has seen an annual growth rate greater than 60 percent. That’s in part because of a federal solar investment tax credit that can enable people to claim a 30 percent credit on their income taxes when they buy a solar energy system.

In Maine, many people are drawn to solar energy because it also allows the customer to tie into the grid and send excess electricity back to the utility. Customers then get a credit on their utility bills.

Wagner said that the state is in a great place to deploy more solar power, but it’s still falling behind.

“Maine doesn’t just lag behind the Northeast, it lags behind the world,” Wagner said.

Steve Weems, executive director of the nonprofit Solar Energy Association of Maine, said getting on board with solar would help not just the environment, but also the state’s economy. Massachusetts has about 14,000 solar jobs, he said, while Maine has about 500.

“On a per capita basis, they’ve got eight times as many solar jobs as we do,” he said. If Maine caught up with Massachusetts, that would mean 4,000 new jobs.

Nationwide, one out of every 50 new jobs is in the solar industry, Weems said. “This is across the country a major growth industry,” he said. “And there aren’t many of those around these days.”

The response for solar sheds is already “pretty overwhelming,” Wagner said, even though the companies announced the new product only a little over a week ago.

Joas Hochstetler, a partner and manager of Backyard Buildings, said solar energy is common among the Amish.

“We use solar strictly in off-grid applications,” Hochstetler said, referencing off-grid solar power, which charges batteries but doesn’t feed back into the larger electrical grid. “The Amish aren’t against technology in itself. We try to reduce use to things that aren’t destructive to the Amish family and our faith.”

It’s a principle that Hochstetler said “everyone shares at some core level.”

The sheds built in Unity use materials that are almost all sourced from Maine, Hochstetler said, and the rest are manufactured in Canada. The six people who work at Backyard Buildings on Leelynn Drive construct the sheds inside a large workshop garage, which allows them to work year-round.

It takes about two days and two workers to construct a solar shed, and another day and three more people to install the solar panels, Hochstetler said. Customers can choose an off-grid or grid-tied solar energy system, which affects the price and size options. There are three sizes offered for each, along with the other options offered with every shed.

A 12-foot by 28-foot grid-tied solar shed that is on display at Backyard Buildings would start at $12,955 and generate 6,000 kilowatt hours per year.

“Either the solar will have to be scaled down or the functionality of the home will be pretty low,” Hochstetler said, but the home probably wouldn’t need as much power, either.

If a roof doesn’t get enough sun exposure, that can affect the rate of return on the solar power. “The shed is pretty neat because we can, for the same cost of putting solar on your roof or pretty close to it, we can put a shed in the optimal location to optimize investment for people,” Hochstetler said.

Creating a product with a solar component was attractive to Hochstetler for two reasons, he said: the principle and the potential.

A lot of the sheds are sold to fill the “American consumerism problem,” providing more space people can fill with stuff. But attaching solar to the shed gives it another layer of meaning.

“I really love the principle of the solar shed, helping people use cleaner energy,” he said.