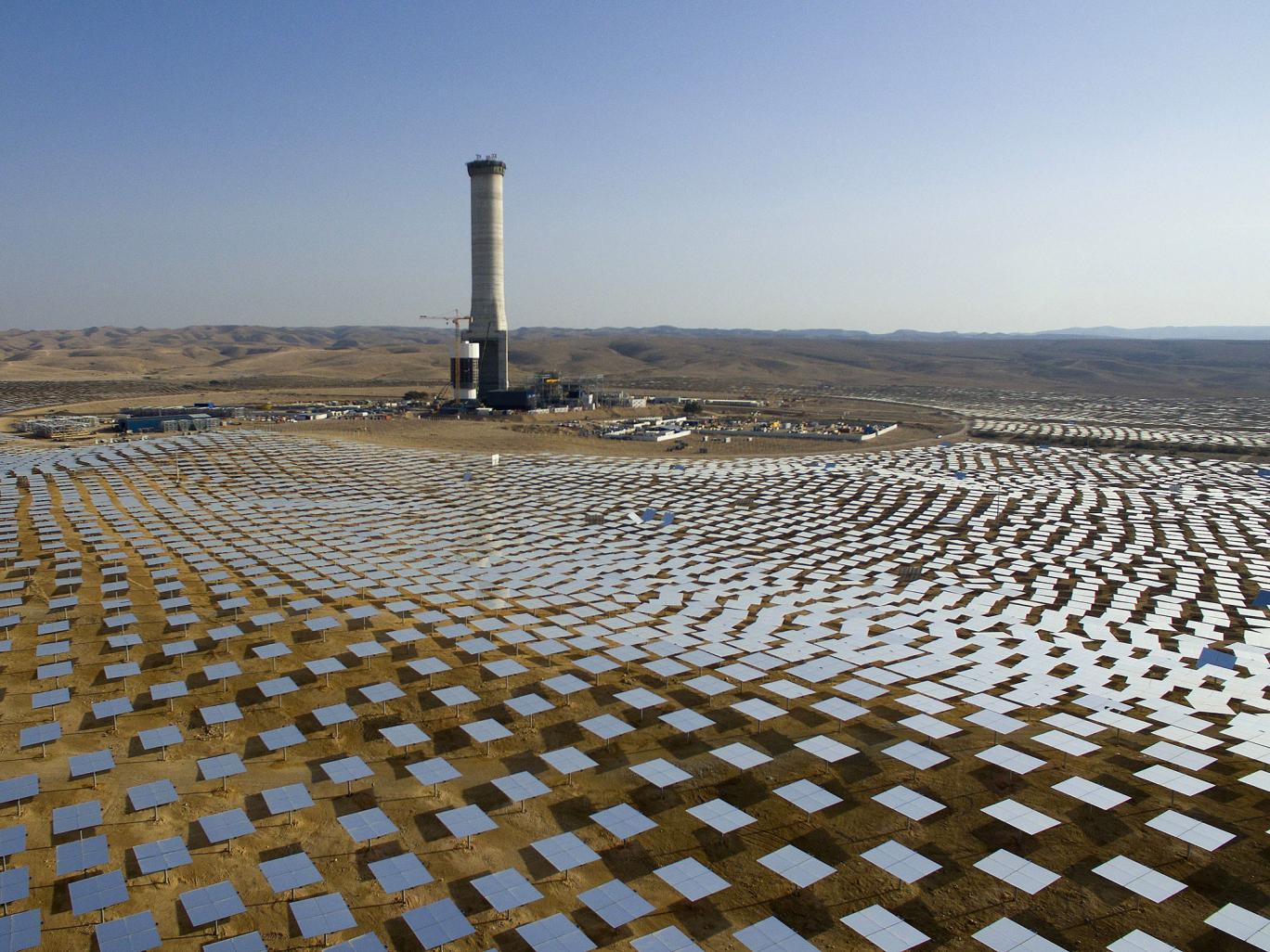 In sunny Israel, solar energy supplies only a small percentage of the nation’s power needs, leaving it far behind countries with cloudier and colder climates.

Now the fledgling solar industry is trying to make a leap forward with a large-scale project boasting the world’s tallest solar tower, as a symbol of Israel’s renewal energy ambitions.

With Israel traditionally running its economy on fossil fuels, renewable energy has long been hobbled by bureaucracy and a lack of incentives. But the country is starting to make an effort, setting a goal of generating 10 percent of its energy from renewable sources by 2020, up from the current 2.5 percent.

The Ashalim project, deep in the Negev desert, is made up of three plots, with a fourth planned for the future, each with a different solar technology. Together, the fields will be Israel’s largest renewable energy project when completed by 2018. They are set to generate some 310 megawatts of power, about 1.6 percent of the country’s energy needs — enough for about 130,000 households, or roughly 5 percent of Israel’s population, according to Israel’s Electricity Authority.

“It’s the most significant single building block in Israel’s commitment to CO2 reduction and renewable energy,” said Eran Gartner, chief executive of Megalim Solar Power Ltd., which is building one part of the project.

The centerpiece is a solar tower that will be the world’s tallest at 250 meters (820 feet).

Solar towers use a method differing from the more common photovoltaic solar panels, which convert sunlight directly into electricity. Instead, towers use a solar-thermal method: Thousands of mirrors focus the sun’s rays onto the tower, heating a boiler that creates steam to spin a turbine and generate electricity.

Encircling the Ashalim tower are 50,000 mirrors, known as heliostats, in a shimmering blanket of glass over the desert. The tower is so tall because the panels were squeezed together to maximize use of the land — and the closer the panels are the taller the tower must be, Gartner explained.

Another solar-thermal plot at Ashalim will be able to store energy even when the sun goes down. A third plot will use photovoltaic solar technology to produce energy.

Yaron Szilas, CEO of Shikun & Binui Renewable Energy, the lead developer of the second solar-thermal plot, said combining the three technologies was a wise move because each has its own advantage. The amount of electricity it produces will be comparable to large-scale solar fields in California and Chile.

There are around a dozen solar tower fields around the world, the largest being the Ivanpah plant in California with some 170,000 heliostats around three 140-meter-tall (460-foot) towers.

Israel has developed some of the world’s most advanced solar energy equipment and enjoys a nearly endless supply of sunshine. But Israeli solar companies, frustrated by government bureaucracy, have mostly taken their expertise abroad.

Countries with cooler climates have outpaced Israel. Germany, for example, gets nearly 30 percent of its energy from renewable sources.

“Israel has a potential to be a sunshine superpower,” said Leehee Goldenberg, director of the department of economy and environment at the Israel Union for Environmental Defense, a non-governmental organization. Despite some steps in the right direction, “Israel’s government hasn’t really been pushing to reach its small goals regarding solar energy.”

Israel has often been reluctant to hand out huge parcels of land, a necessity for large-scale solar power production, Gartner said. Large projects also demand access to state-owned infrastructure like gas, water and electricity, and connecting to those utilities out in remote plants in the Negev desert often takes time.

Israel’s Finance Ministry said the price of generating solar power in Israel has come down, and the ministry has pushed new laws to promote the industry. Recent legislation has also provided incentives and cut down some of the bureaucracy for Israelis wanting to install solar panels on their roofs.

The ministry said if Ashalim is successful, it will aim for more such facilities.

After the discovery of major natural gas deposits offshore, Israel now gets 70 percent of its energy from cleaner-burning gas. That discovery was welcome, Szilas said, but it has also delayed the impetus for promoting renewable energy.

The developers in the Ashalim project say they want Israel to step up its renewable energy goals.

“With all the sun that we have and how progressed we are in technology, these goals are very, very, very modest,” Szilas said. “But these are the goals that were set, and we are working toward it.”

Previous Post: « Study Shows solar energy as promising power source for medical implants
Next Post: There’s an unlikely pioneer of renewable energy in the US »