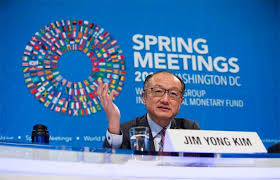 It is better to move towards solar energy than to continue to build coal plants, World Bank President Jim Young Kim said today, citing India’s massive efforts in solar energy which has made it “cost effective” and “quite competitive”.

“There’s some really good news. We’ve our IFC (International Finance Corporation), our private sector group, has been working in India and as recently as a year and a half, two years ago, the price of solar was still around 10, 11 cents per kilowatt hour.

“And so coal was still much cheaper than solar. But the latest option that we’ve been involved in got that price down to 4.4 cents a kilowatt hour. So now solar is quite competitive with coal,” Kim told reporters.

He said there was need to keep doing that as the options around the world, even in emerging markets, have gone down below three cents a kilowatt hour at which point it “becomes cost effective”.

“The incentives are clear that moving towards solar is better than continuing with the building of coal plants. So we need to find ways of accelerating that process. We hope to come out of these spring meetings with a platform like that in place,” Kim told reporters at the news conference held at the start of the annual Spring meeting of the International Monetary Fund and the World Bank.

He said climate change issue continued to be a priority for the Bank.

“We are thinking about how we can bring together the private sector, the public sector, philanthropists, environmental organisations, governments, to try to really create momentum around financing for climate change,” he said.

On coal, he identified six countries – China, India, the Philippines, Indonesia, Pakistan and Vietnam which are putting most of the coal-based carbon in the air.

“So if we can change the incentives, and change the way that financing for energy works in those six countries, we could potentially have a huge impact on how much carbon we put in the air,” Kim said.

“We call this our following the carbon initiative in that we have to make progress in these six countries of moving them much more quickly to renewable source. All right, so now the good news is that renewable source are getting cheaper,” he said referring to the low price of solar.

“I’m told that storage technology is getting better very quickly, and that within a few years, we may have some major transformations in the ability to store energy from intermittent sources. So, with all that happening, we think that a major issue is going to be cost to finance, the cost of capital,” Kim said.

However, he rued that a grant of hundred billion was promised, but is not coming.

“I mean the Green Climate Fund is still right around 7.5 billion after two or three years. The estimation was that there would be many more billions of dollars than that. So we’re using this meeting to bring all of the leaders together to come up with a new plan,” he said.

Kim said the bank was going to put on the table a different kind of platform where all the different groups that are trying to have an impact on climate can work together to put the financing tools together.

“The bottom line is this, that the science of climate change didn’t change with any particular election. And I don’t see that it will,” he asserted.