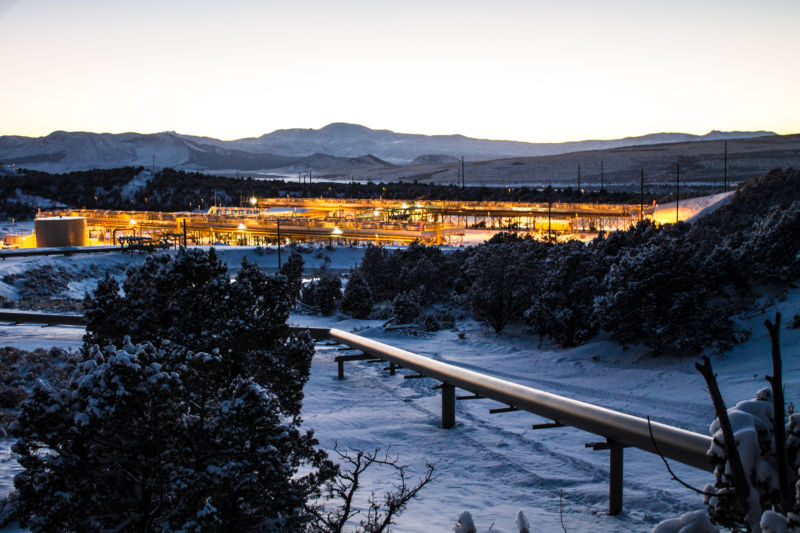 Renewable energy can be a tricky business. If you’re not dealing with the intermittency of solar or wind power, you might struggle with some of geothermal’s more complex issues. For example, older geothermal plants rely on steam output that can diminish over time or harm the plant’s turbine components. Or, a geothermal plant can damage the subterranean aquifer that it’s taking hot water (called brine) from. Or, if the geothermal plant is air-cooled, a particularly hot day can reduce the plant’s efficiency.

To combat all of these issues, Italian renewable energy company Enel Green Power has been working to make its geothermal resources in Fallon, Nevada, and Cove Fort, Utah, more efficient by combining them with other renewable power sources. In its most recent endeavor in Cove Fort, Enel cleverly combines hydroelectric power with geothermal power to provide more electricity for the plant’s operation.

Usually, geothermal plants pump mineral-rich brine up from areas of hot rock beneath the surface of the Earth, convert that heat to energy, and then re-inject that water back into the ground to heat back up again. The re-injection process is usually as simple as it sounds—just put the water back in the ground where you found it once it cools. Instead, Enel is harnessing power from all that falling water. Brian Stankiewicz, Enel’s Senior Operations Manager for geothermal and solar operations, told Ars that the company realized it “had an exponential amount of hydraulic energy that could be harnessed” shortly after it bought the defunct plant in 2007.

Enel called on the expertise of oilfield service provider Baker Hughes to help it install a downhole generator in the injection well, opposite the production well where the water is pumped up. The generator is placed at the bottom of the well receiving the recycled geothermal water, connected to a turbine above it that spins as the re-injected water is pulled down by gravity. The generator changes that mechanical energy into electrical energy, producing an additional 1,008 megawatt hours for the plant. Enel says the hydroelectric addition has improved Cove Fort’s efficiency by 8.8 percent.

Perhaps that seems like a small amount for a geothermal plant that generates 160,000MWh annually, but the hydroelectric component also helps protect Cove Fort’s aquifer. On many geothermal projects, the amount of brine that can be re-injected is limited to prevent damaging underground rock formations, Stankiewicz told Ars, adding, “if the flows get too large for the well, it can create a lot of turbulence.” Enel’s downhole generator at Cove Fort controls the injection of the brine back into the aquifer and limits those damaging “turbulent vortexes,” as geothermal engineers call them.

The hydroelectric component is an interesting addition to what was, as recently as 2007, an old, non-operational geothermal plant. Construction began on Cove Fort in southwestern Utah in 1984, and it was a fully operational steam turbine geothermal plant between 1990 and 2003. But steam turbines at geothermal plants don’t always have the longest life—minerals in the brine can wear out turbine components faster than a steam engine using regular water. Stankiewicz also attributed the original plant’s degradation to aspects of the reinjection process. “A conventional flash style plant doesn’t allow you to reinject 100 percent” of the brine, he said. “There’s a lot of evaporation.”

So when Enel bought Cove Fort in 2007, it converted the plant to a more efficient Rankine binary cycle plant—instead of using straight steam to power turbines, Enel pumps the hot water up to a heat-exchange site where a secondary fluid with a lower boiling point than water (in this case pentane) is heated by the water and evaporates, creating hot vapor that can power the plant’s generators.

“Over the last couple of decades, geothermal development has shifted toward the use of liquid dominated resources and away from steam as new power generation technologies make lower temperature resources economical to develop and operate,” Stankiewicz explained in a follow-up e-mail.

Enel reopened Cove Fort in 2013, and since then the 25MW plant has powered approximately 13,000 homes served by the Salt River Project, a utility cooperative in Arizona.

Checking in on some 16ft-tall mirrors

The combination of geothermal and hydroelectric energy at Cove Fort is a first for North American geothermal plants. But it’s the second hybrid plant that Enel has built combining geothermal with other renewable resources. Enel’s Stillwater plant in Fallon, Nevada, is the only triple-hybrid renewable energy plant in the US, according to the Department of Energy (DOE), combining geothermal power with a 26MW array of photovoltaic solar panels, and a concentrated solar power (CSP) system that uses mirrors to add heat from the Sun to already hot geothermal water. In fact, Ars took a tour of Stillwater way back in 2014, when the company was still in the process of installing the 16-foot-long parabolic mirrors that currently concentrate heat on a 5” pipe full of geothermal brine.

The CSP system finally came online in 2015, and in October of this year, the US Department of Energy and Enel announced that they would be working together to conduct some studies on ways to optimize Stillwater’s three energy sources.

Currently the CSP provides some interesting efficiencies to Stillwater. Shortly after opening the geothermal portion of the plant in 2009, Enel realized that the ambient air temperature in the Nevada desert was reducing how quickly its air-cooled geothermal system could shed heat, which harmed how much energy the plant could produce in the middle of the day. While Enel can’t make a hot desert afternoon cooler, it realized it could make the geothermal brine it pumped from the Earth hotter. Its parabolic mirrors can heat the air in front of them to about 600 degrees Fahrenheit, while the brine inside goes from 300 degrees Fahrenheit out of the ground to 390 degrees Fahrenheit.

According to the DOE, this strategy has been working for Enel: “between the months of March and December 2015, the CSP component increased the amount of overall output by 3.6 percent, on average.” That, in combination with the solar PV array, means that Stillwater is a renewable energy plant that’s producing 24/7—during the day when geothermal energy production might drop off, the solar array is producing energy and the CSP system is boosting the weakened geothermal performance. At night when the solar array isn’t producing anything, geothermal is functioning well, and the cool night air means that the CSP system isn’t needed.

What’s does the future hold?

Enel couldn’t say if there are any more projects like this in the works, but Stankiewicz did say that Cove Fort’s Down Hole generator scheme could likely work on other geothermal sites. “The Cove Fort plant presented unique geological conditions that proved to be a good first testing facility for this technology,” he wrote to Ars in an e-mail. “We are actively looking at ways in which this technology can be applied at other sites around the world with the same geological conditions. An analysis needs to be done of individual injection wells to ensure there is enough head pressure and flow to allow the installation of the Down Hole Generator.”

And, despite the incoming Trump administration’s aversion to renewables, the company is publicly optimistic that there will continue to be a market for renewable energy in the US. Besides the geothermal plants, Enel has a handful of solar and wind farms, and it announced a deal in October to construct a 300MW wind farm in Missouri. “Our company is well positioned to continue its growth in the US as evidenced by its more than 1 GW under construction and continued investments in both renewables and the US market,” a company spokesperson said.

Correction: The story originally said that Fort Cove was the first geothermal plant to use hydroelectric power and geothermal power together, but a project from the Northern California Power Agency actually predates Enel’s project.