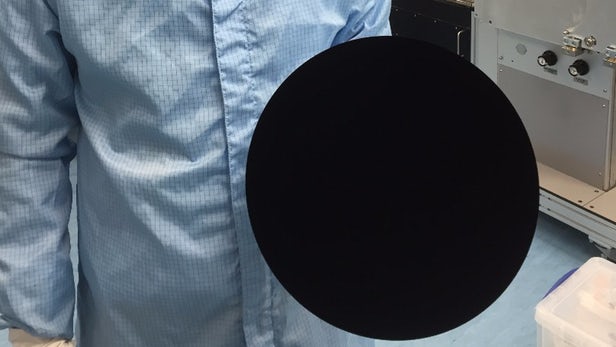 Vantablack is a “special coating made from millions of carbon nanotubes, each one measuring around 20 nanometres (roughly 3,500 times smaller than a human hair) by 14 to 50 microns” that was first developed by a team of British researchers in 2014.

For the time being, the material isn’t commercially available. But in response to widespread interest, the company behind the product, Surrey NanoSystems, said in a press release that it is ramping up production in hopes of getting it on the market in the near future.

One group that’s especially interested in Vantablack is the renewable energy sector. That’s because the material could significantly increase the efficiency of solar cells that convert sunlight into electricity.

Vantablack — which absorbs almost 100 percent of visible, ultraviolet, and infrared light — could be added to the back of solar cells (also known as a photovoltaic cells) on solar panels. Because of its incredible darkness, the material would help prevent sunlight from bouncing off the cell.

As Gizmodo noted, in 2015, researchers managed to enhance the efficiency of social cells by adding a layer of deep black silicon to the back of photovoltaic cells. The material, which wasn’t as black as Vantablack, increased the amount of sunlight that the solar cells absorbed, according to the results of the study, which were published in the journal Nature Nanotechnology.

“This is an advantage particularly in the north, where the sun shines from a low angle for a large part of the year,” Professor Hele Savin, who co-authored the study, told PhysOrg. “We have demonstrated that in winter Helsinki, black cells generate considerably more electricity than traditional cells even though both cells have identical efficiency values.”

Previous Post: « Can we use solar energy to make fertilizer right on the farm?
Next Post: Renewables break records as wind and solar come online, International Renewable Energy Agency says »