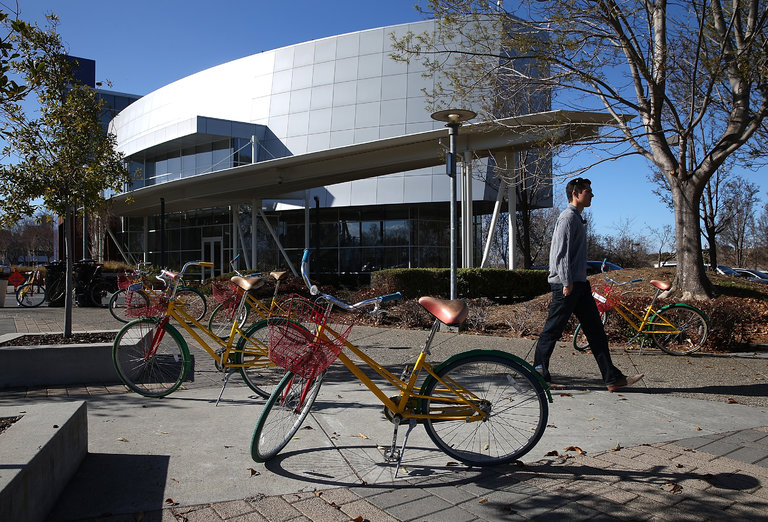 Last year, Google consumed as much energy as the city of San Francisco. Next year, it said, all of that energy will come from wind farms and solar panels.

The online giant said on Tuesday that all of its data centers around the world will be entirely powered with renewable energy sources sometime next year.

This is not to say that Google computers will consume nothing but wind and solar power. Like almost any company, Google gets power from a power company, which operates an energy grid typically supplied by a number of sources, including hydroelectric dams, natural gas, coal and wind power.

What Google has done over the last decade, with relatively little fanfare, is participate in a number of large-scale deals with renewable producers, typically guaranteeing to buy the energy they produce with their wind turbines and solar cells. With those guarantees, wind companies can obtain bank financing to build more turbines.

The power created by the renewables is plugged into the utility grid, so that Google’s usage presents no net consumption of fossil fuels and the pool of electricity gets a relatively larger share of renewable sources.

“We are the largest corporate purchaser of renewable energy in the world,” said Joe Kava, Google’s senior vice president of technical infrastructure. “It’s good for the economy, good for business and good for our shareholders.”

Unlike carbon-based power, Mr. Kava said, wind supply prices do not fluctuate, enabling Google to plan better. In addition, the more renewable energy it buys, the cheaper those sources get. In some places, like Chile, Google said, renewables have at times become cheaper than fossil fuels.

Whether Google is the largest buyer of renewables would be difficult to verify, as many industries do not release data on how much energy they consume. There is no doubt, however, that Google’s large computer complexes, along with similar global operations by Amazon and Microsoft, are among the world’s fastest-growing new consumers of electricity.

Google hopes that success in working with large wind farms, like the 50,000-acre facility in Minco, Okla., which supplies Google’s large data center in Pryor, Okla., will spur development of the industry. NextEra Energy, which owns the wind farm, has about 115 wind farms in the United States and Canada.

About 25 percent of United States electricity goes to businesses, and companies like Google are now about 2 percentage points of that. Dominion Virginia Power, located in a state with perhaps the world’s largest concentration of data centers, last year had a demand increase from those customers of 9 percent, while overall demand was nearly flat, according to Dominion.

Google operates eight different businesses, including internet search engines, YouTube and Gmail, each of which has over 1 billion customers. They run on a global network of 13 large-scale data centers, each one a complex of many buildings containing hundreds of thousands of computers.

The 5.7 terawatt-hours of electricity Google consumed in 2015 “is equal to the output of two 500 megawatt coal plants,” said Jonathan Koomey, a lecturer in the school of earth, energy and environmental sciences at Stanford. That is enough for two 140,000-person towns. “For one company to be doing this is a very big deal. It means other companies of a similar scale will feel pressure to move.”

It moves the needle on costs to have a big consumer, Mr. Koomey added, since a larger market tends to allow for economies of scale and more innovation. “Every time you double production, you reduce the cost of solar by about 20 percent. Wind goes down 10 to 12 percent,” he said.

Facebook has entered into similar deals with wind producers. Last week, Amazon reiterated its long-term commitment to power its machines entirely with renewable energy, though for 2016 it expects to be above about 40 percent of its goal. It has announced five more solar projects.

Microsoft says it has been 100 percent carbon neutral since 2014, but much of this comes from the purchase of carbon offsets, which are investments in things like tree planting or renewables projects meant to compensate for the fossil fuels a company consumes. The company hopes to have half of its electric power supplied from wind, solar and hydroelectric sources by 2018. Its data centers currently use about 3.3 million megawatt-hours of power a year.

Google has long championed uses of alternative energy. In 2007, it patented an idea for a floating data center that would be powered by waves. It was never built. Less fanciful, but so far equally fruitless, have been schemes to source lots of geothermal power, or capture the high-velocity winds of the stratosphere with large kites. It also takes pride in the energy efficiency of its data centers.

Critics note that while Google might be adding wind and solar to the world’s power grid, overall it is still dependent on fossil fuels, since sun and wind power are intermittent, while demand for things like YouTube cat videos is continual.

“In my mind it’s a P.R. gimmick,” said Chris Warren, vice president of communications at the Institute for Energy Research, a think tank in Washington supported largely by donations from individuals and companies in the fossil fuel industry. “If they think they can actually support themselves with wind and solar panels, they should connect them directly to their data centers.”

Next year’s goal will be 95 percent accomplished with wind turbines around the world, Mr. Kava said, and Google’s support for the industry could keep prices dropping, particularly relative to things like coal. “We’re technology-agnostic, but we’re not price-agnostic,” he said.