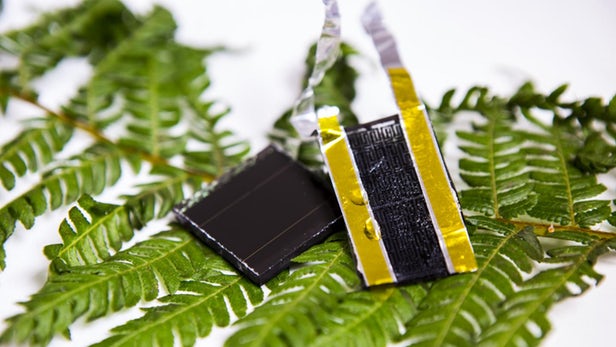 Solar cells are constantly getting better at collecting energy from sunlight, but their ability to store it isn’t improving quite as fast. Made from graphene and with a fern-inspired fractal structure, engineers at RMIT University have developed a new prototype electrode that could enable solar harvesting and storage systems that are thin, flexible and have high capacity.

While the sun is attractive as an energy source, solar-powered devices usually have to fall into two categories: those with big bulky setups, or smaller ones that don’t need as much power. The RMIT team’s new electrode is designed to bridge that gap, with a better energy density inspired at the microscopic level by the repeating pattern (called a fractal) seen in the veins of a species of American fern.

“The leaves of the western swordfern are densely crammed with veins, making them extremely efficient for storing energy and transporting water around the plant,” says Min Gu, co-author of the study. “Our electrode is based on these fractal shapes – which are self-replicating, like the mini structures within snowflakes – and we’ve used this naturally-efficient design to improve solar energy storage at a nano level.”

Compared to conventional batteries, supercapacitors can be thinner, more durable and output power much faster, meaning they have the potential to eventually spawn thin, flexible power sources for wearable electronics or even cars. Storage capacity is their downside, but RMIT’s new electrode, with a higher energy density granted by its fractal pattern, is designed to address that very problem.

“The immediate application is combining this electrode with supercapacitors, as our experiments have shown our prototype can radically increase their storage capacity – 30 times more than current capacity limits,” says Gu. “Capacity-boosted supercapacitors would offer both long-term reliability and quick-burst energy release – for when someone wants to use solar energy on a cloudy day for example – making them ideal alternatives for solar power storage.”

Since the electrode is made with graphene – one-atom-thick sheets of carbon that conduct electricity – it can be thin and flexible. Partnering that with the capacity-boosting properties of the fractal pattern, the team hopes to eventually create a thin solar cell that can harvest and store energy on the one chip.

“We can do that now with existing solar cells but these are bulky and rigid,” says Litty Thekkekara, lead author on the study. “The real future lies in integrating the prototype with flexible thin film solar – technology that is still in its infancy. With this flexible electrode prototype we’ve solved the storage part of the challenge, as well as shown how they can work with solar cells without affecting performance. Now the focus needs to be on flexible solar energy, so we can work towards achieving our vision of fully solar-reliant, self-powering electronics.”